The Vietnam War was a conflict that pitted the communist government of North Vietnam against South Vietnam and its principal ally, the United States. The conflict was intensified by the ongoing Cold War between the United States and the Soviet Union. More than 3 million people (including over 58,000 Americans) were killed in the Vietnam War, and more than half of the dead were Vietnamese civilians. Opposition to the war in the United States bitterly divided Americans, even after President Nixon ordered the withdrawal of U.S. forces in 1973. Communist forces ended the war by seizing control of South Vietnam in 1975, and the country was unified as the Socialist Republic of Vietnam the following year.

What types of collectible Vietnam War items are there?

Vietnam War Militaria collecting offers a wide variety of object to collect. Theater made patches for the US soldiers stationed in Vietnam is one of the largest areas of collecting in Vietnam collectibles. These beautifully hand made patches by local shops in Vietnam and Laos can be worth thousands of dollars for US Special Forces patches to under a hundred dollars from some more commonly found Army patches. In addition to patches, there are several types of camouflaged uniforms that were used in Vietnam, including the famous “Tiger Stripe” pattern.

It is important to well educated on the authenticity of these items, as many of them are reproduced. It is helpful to talk with other knowledgeable collectors in the fields, join clubs and online forums. You can also attend in person military collector shows that are held around the world.

There are many reproduction Vietnam items made for collectors looking to fill spots in their collection until they can find an original example. Also, many people are reenactors and would rather use reproduction items than original.

It is a good idea to know sellers return policy when purchasing items. 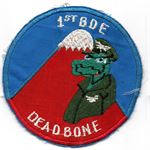