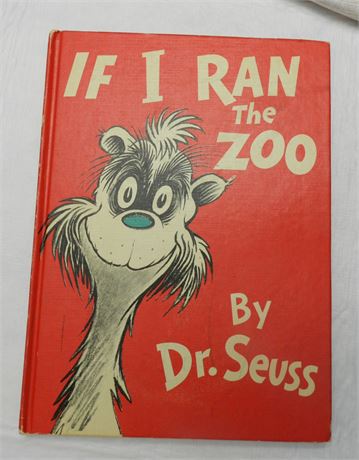 Payment Instructions
I can invoice you if I have your email, or you can pay me directly by Paypal, Friends & Family, to my email address
Details
Description

In 2021, Seuss's publishing interests announced the six books—And to Think That I Saw It on Mulberry Street, If I Ran the Zoo, McElligot's Pool, On Beyond Zebra!, Scrambled Eggs Super!, and The Cat's Quizzer—would no longer be published, because they “portray people in ways that are hurtful and wrong.”.  In If I Ran the Zoo, there's an objectionable image of Africans in grass skirts - the image is shown in the listing photo.

This Dr. Seuss classic was first published in 1950.  There is no precise date of publication found in this copy, but I am surmising it was a 1967 printing.  First, the original colophon in 1950 had 7 lines; this colophon is the second one produced and it had 8 lines when first appearing shortly after the first printing and apparently it has remained to this printing.  The most informative is the list of books.  The last book in the back cover first list is, The Cat in the Hat Song Book, and it was first printed in 1967, and the last book in the Beginning Readers list is Fox in Socks, first printed in 1965.  Finally, the 9-digit "SBN" of 394-80081-8 seen on the back cover (not found elsewhere in the hardback) supports a date of publication of 1967.  According to Wikipedia on the origin of the ISBN:  "The initial ISBN identification format was devised in 1967, based upon the 9-digit Standard Book Numbering (SBN) created in 1966."

Lacking dust jacket, but otherwise, I would grade this copy as G.  There is moderate corner wear and light edge wear on the boards. There is a few marks seen on the front cover,  there is a crayon scribble on the first free decorative endpaper (see listing photo), and a second crayon scribble in one of the pages of the book (not shown in listing photo)..  Otherwise, the book is solidly bound with bright colorful pages.