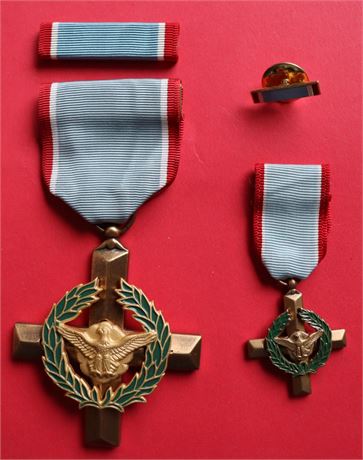 The Air Force Cross (AFC) is the United States Air Force and United States Space Force's second highest military decoration for airmen and guardians who distinguish themselves with extraordinary heroism in combat with an armed enemy force. The medal is awarded to any person, while serving in any capacity with the Air Force or Space Force, who distinguish themselves by extraordinary heroism, not justifying the award of a Medal of Honor.

Originally entitled the "Distinguished Service Cross (Air Force)", the Air Force Cross was first proposed in 1947 after the creation of the United States Air Force in September that year as an independent armed service. The medal was designed by Eleanor Cox, an employee of the Air Force, and was sculpted by Thomas Hudson Jones of the U.S. Army Institute of Heraldry.

Additional awards of the Air Force Cross are annotated by oak leaf clusters.

The President may award an Air Force cross of appropriate design, with ribbons and appurtenances, to a person who, while serving in any capacity with the Air Force, distinguishes themselves by extraordinary heroism not justifying the award of a Medal of Honor:

You Have 4 Day for Payment

The pictures are part of the description and are the actual item.

TAKE ADVANTAGE OF OUR FREE SHIPPING!!!

I AM SELLING OFF A U.S. COLLECTION

Free shipping For Domestic Only: us only

Note:  I do NOT provide shipping insurance as a standard practice.  Should you desire insurance, please contact me prior to paying for the item and we will add it to your invoice if it is available.

WE COMBINE SHIPPING FOR MULTIPLE ITEMS - PLEASE VISIT OUR STORE LISTINGS TO SEE OUR LARGE SELECTION OF UNITED STATES MILITARIA & MILITARY COLLECTOR. THIS WILL MAKE A GREAT ADDITION TO YOUR COLLECTION!!!

International Buyers Please Note: Import duties, taxes, and charges are not included in the item price or shipping cost. These charges are the buyer's responsibility. Please check with your country's customs office to determine what these additional costs will be prior to bidding or buying. We will not under value merchandise or mark the item on the customs form as a gift.

The cost of shipping International orders by the U.S. Postal Service is based on the value & weight of the item(s) when packed.

We combine the shipping for multiple items. The Winning Bidder agrees to pay for this item within 4 days of the auctions close. Order with Confidence, we have been in business for over 30 years. Your Satisfaction is Guaranteed!